Hillman State Park in Western Pennsylvania is a 3,600+ acre park that is mostly undeveloped and practically unknown compared to the large Raccoon Creek State Park that is just 5 miles down the road. The land was used as a strip mine but was reclaimed as a nature park more than 55 years ago. I recently went foraging for photos while hiking on the serpentine trail system. I found an ancient turtle, a native Pennsylvania orchid, a parasitic plant, a mushroom with a symbiotic relationship to a borer beetle and many more unique “Foto Finds.”

As I pushed through the pine forest, I almost tripped on a woodland turtle – the Eastern box turtle (Terrapene carolina carolina). These colorful turtles can live over 100 years and eat plants and bugs. This particular turtle was in the middle of an insect dinner (pictured below) when I rudely interrupted. I tried to ask permission to take photos, but it politely didn’t talk with its mouth full, so I took photos and videos anyway. 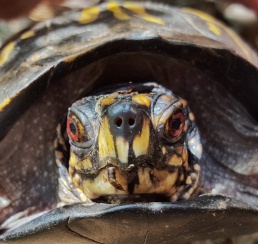 One of my favorite plants is a native Pennsylvania evergreen orchid. It is called the Downy Rattlesnake Plantain (Goodyera pubescens). I rarely find these when I am hiking, although in this park, they were quite plentiful. Their tiny white flowers will probably be in bloom by mid July. 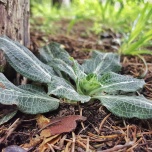 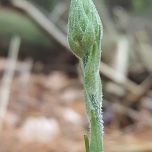 Another unique plant that is found in Western Pennsylvania in the middle of the summer is a white parasitic plant called the Monotropa uniflora (common names include “Ghost Plant, Indian Pipes, etc.). I provide more details about this plant in a post that I did about another Pennsylvania park a couple of years ago. You can read this post here, but simply put, this plant attaches itself to a mushroom which has a symbiotic relationship with a tree. The tree gives some sugars and nutrients to the mushroom, some of which are stolen by this plant.

Another fascinating find during my hike was the Cryptoporus volvatus mushroom found on pine trees. This polypore mushroom is quite interesting because of its method of using wood borer beetles to spread its spores. Normal polypores have a series of spore tubes on the bottom and just drop their spores into the wind when they are ready. This mushroom has similar pore tubes, but is different in that the spores need to be put in a specific place to grow the mushroom colony – inside the tree. If the spores just dropped into the wind when they were mature, then they wouldn’t find their mark.

Instead, there is an outer shell that traps the spores when they fall and hold them in place until a hungry borer beetle drills inside the shell. The borer beetle gets coated with the spores while eating the inside of the mushroom. After it is done, it climbs back outside and drills a hole through the bark into the tree and inadvertently “plants” the spores in the new hole in the tree.  Here are some photos: 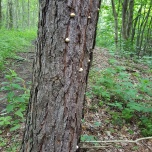 Below are photos of some other things that I saw during my hike. 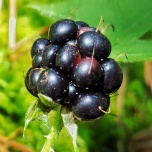 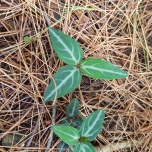 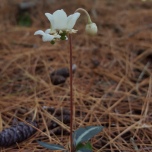 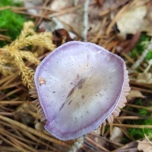 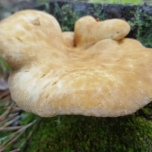 * Disclaimer: I am a photographer, not a trained mycologist or scientist. I do not make any warranties as to the safety of consuming any wild foods and accept no liability or responsibility for any consequences resulting from the use of or reliance upon the information contained herein, nor for any health problems, consequences or symptoms which may arise from contact with or the ingestion of fungi, mushrooms, fungi spores or any plant herein described. Any person who ingests plants, mushrooms or any other potentially dangerous fungi, or puts themselves into direct or indirect contact with it for any reason, does so at their own risk. If you have any doubts whatsoever about your identification of a wild plant or mushroom, don't eat it! There are many edible species of plants and mushrooms but there are also many toxic species as well. Some toxic mushrooms closely resemble edible mushrooms and can be fatal if ingested, even in small quantities. "When in doubt, throw it out" is an important phrase to remember.
Loading Comments...
Comment
×
<span>%d</span> bloggers like this: